Who Owes on a Lease When the Tenant Passes Away?

Fewer and fewer Americans own their homes and instead are choosing to sign leases. What happens when someone passes away and money is still owed on the lease? 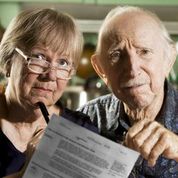 The New York Times runs a regular column where people can write in and have their real estate questions answered by an expert. In a recent such column, titled “A Noisy Cafe Next Door,” an elderly woman wrote and asked whether her daughter would be responsible for a recently signed lease if the writer passed away during the term of the lease.

The woman’s estate would owe on the lease and need to make regular payments. However, New York law does provide that the tenant’s estate can attempt to find a new tenant, which the landlord must accept if reasonable.

This is fairly standard for any contract that you sign, and a lease is a form of contract.

Unless the terms of the contract state that it terminates upon death, then the person’s estate is normally responsible for that contract.

One thing to note, however, is that like New York, many states do have special provisions in the law regarding how to handle post-death leases.

Before paying on a lease, an estate administrator should consult with an estate planning attorney in his or her jurisdiction to see how local law applies. Give us a call at (978) 342-1914 or visit us at www.dellamonaca.com.